Why is the Corona Crisis in India Impeding the Growth of the Global Economy?

The second wave of the Corona epidemic affected India, with a devastating impact, as more than 300,000 new infections and 3 thousand deaths were recorded daily across the country at the present time. The total number of deaths exceeded 200 thousand cases; but it is also clear that these statistics do not reflect reality.

In a report published by the Australian website “The Conversation”, writer Uma S Kamphpatti said that the ferocity of the second wave in India is linked to a combination of factors, most notably government complacency driven by poor data collection, denial of the truth of data, and a mutated strain New highly contagious, and some large and disorganized religious and political events.

India, with a population of 1.4 billion and one sixth of the world’s population, is experiencing a multidimensional humanitarian crisis that will also affect the global economy in several ways.

India is the fifth largest economy in the world and contributes significantly to global economic growth. With relatively high growth rates ranging between 4% and 8%, it has a significant impact on the global economy.

In early 2020, before the pandemic, the International Monetary Fund warned that India’s apathy was the main reason behind stagnant global growth numbers in 2018 and 2019.

A major recovery was expected in 2021 both in India and in the world; But today it is doubtful that, besides the significant problems associated with the new mutated strains in Brazil and South Africa, the impact on global growth could be significant, even before any spillovers are taken into account.

In terms of spillovers, the crisis in India is likely to cause international restrictions to last longer than expected, for example, on a recent flight from New Delhi to Hong Kong, 52 passengers tested positive for COVID-19. It requires preventing the virus from spreading from India. Strict quarantine measures and travel restrictions, which is bad news for airlines, airports and the companies that depend on them, will dampen global economic growth. 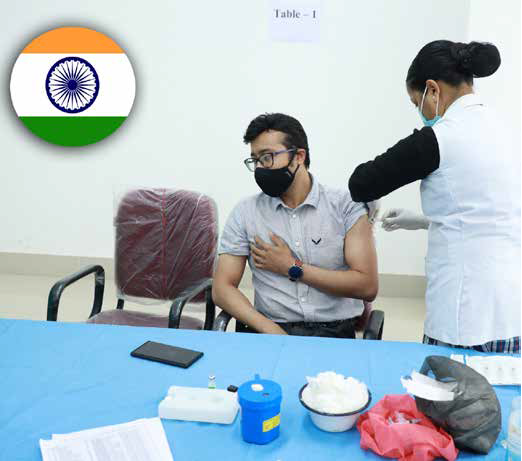 The pharmaceutical industry in India is the third largest in the world in terms of size, and ranks 11th in terms of value. It also contributes 3.5% of the total medicines exported globally, and accounts for about 20% of global exports of equivalent medicine. If these exports are damaged, Healthcare will be affected worldwide, which in turn will again affect global growth.

India currently produces 70% of the world’s vaccines, as the Serum India Institute has granted the rights to produce the “AstraZeneca” vaccine for 64 low-income countries under the “COVAX” program of the World Health Organization, in addition to 5 million doses allocated to the UK.

The crisis in India has already led to the postponement or cancellation of vaccine exports; this has made many countries vulnerable to new waves of the virus that may delay the possibility of their economic activity returning to normal.

If India is unable to provide vaccine supplies to the rest of the world, it is expected that this will have indirect effects in the form of frequent closures, stressing the importance of following social distancing measures, and a significant decrease in economic activity.

India provides back office staff (non-customer-facing management and support personnel) for many activities in Western Europe and the United States, particularly in the health and financial sectors, and with these services at risk today, the US Chamber of Commerce is concerned that the Indian economy could create a drag on the economy. Moreover, for the UK, trade links with India are of great importance especially in the wake of Brexit.

Given all these issues and the humanitarian crisis, it has become imperative for the world to move quickly to help India whether it asks for help or not. We are seeing signs of this happening, albeit after a delay, as the United Kingdom provided oxygen concentrators and respirators, while the United States supplied Initial vaccine, medication, rapid tests and ventilators, Germany provided oxygen and medical aid.

The Indian government’s attempts to deal with the current crisis may be ineffective; but failure to realize how it affects the world would amount to another degree of complacency with the crisis.

If the major powers fail to do all they can to help, India’s crisis will soon become a global crisis, not just in the field of health; but in the economic field as well.